We are incredibly excited and proud to announce that Waverley's own Larrissa Miller has been selected by Gymnastics Australia for the single Women's Gymnastics position on the Australian team for the Rio Olympics!!

Australia's top 24 senior women's gymnasts trialled for the one ticket to the Rio Olympics on offer at the Australian Championships held at the Hisense Arena from May 23rd - June 4th. Larrissa truly showed what champions are made of, when despite battling a respiratory infection for the 3 weeks beforehand, she still came out and performed exceptional gymnastics culminating in winning the Australian Floor title.

Larrissa represented Australia at the 2012 London Olympics, and with her selection to Rio will now be a 'dual Olympian'. She is also a Commonwealth Games dual silver medalist, and a 5-time World Championships representative. Upon being informed of her selection Larrissa said, "It kind of knocked the wind out of me, and I started crying. Realising that I am the one gymnast selected to represent Australia at the Olympic Games is so surreal. It's still hard to believe."

Larrissa's coach, and Waverley Gymnastics Centre Head Coach John Hart, has been selected as the Australian WAG Gymnastics Coach for Rio. John said, "I am absolutely thrilled for Larrissa's well deserved selection and we are both honoured to be wearing the Green and Gold for Australia in Rio - we hope to make everyone very proud!" 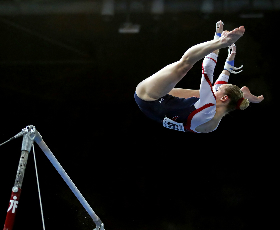